Welcome to the world of Zaatar which is cherished in the Middle East and northern Africa for many millenniums. the well-known Zaatar’s are Lebanese Zaatar, Israeli, Jordanian and Syrian* It is also used in Israeli cooking.  Zaatar is a mixture of grounded dried herbs. In the biblical time, it was called the same name except the herb was called hyssop which is a protected spice at this time. Now the plant thyme which is from the same family and is used with the mixture of a sesame seed, marjoram, oregano, nuts, sumac sea salt and other spices that you can also create of your own. 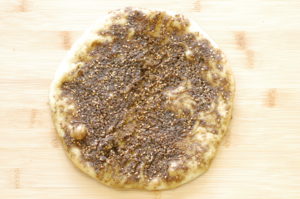 Zaatar is a great Vigan food substitute especially for breakfast. its also Gluten free with an incredible Aroma and is very high in minerals.